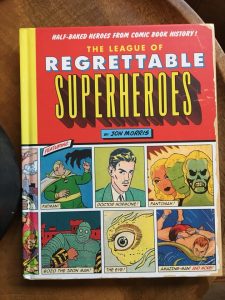 Through all ages of comic book creation Golden, Silver, or Modern, this book lays out many of the heroes who never really caught on with the public. People like Fatman who can turn himself into a flying UFO, or the Flying Eye, or NFL SuperPro. There are 250 pages of forgotten heroes.

I learned a couple of things from this book:

Yeah some of the ideas are silly, but even if these heroes didn’t work, think about all the ones that were successful. The creators didn’t stop creating just because they had a few bad ideas. They worked through them and went on to write some of the most memorable stories we’ve read.

2) Just because an idea isn’t relevant now, doesn’t mean it won’t be later.

Looking through the list of characters in this book, I’ve noticed a couple making a resurgence lately. Specifically the DC Super Pets. My son loves to read these series of books. Squirrel Girl is also making a comeback in animation. And there was talk of a ROM, Spaceknight movie in the last couple of years.

Ideas come and go. But you don’t know if they’ll work unless you put them out there first.